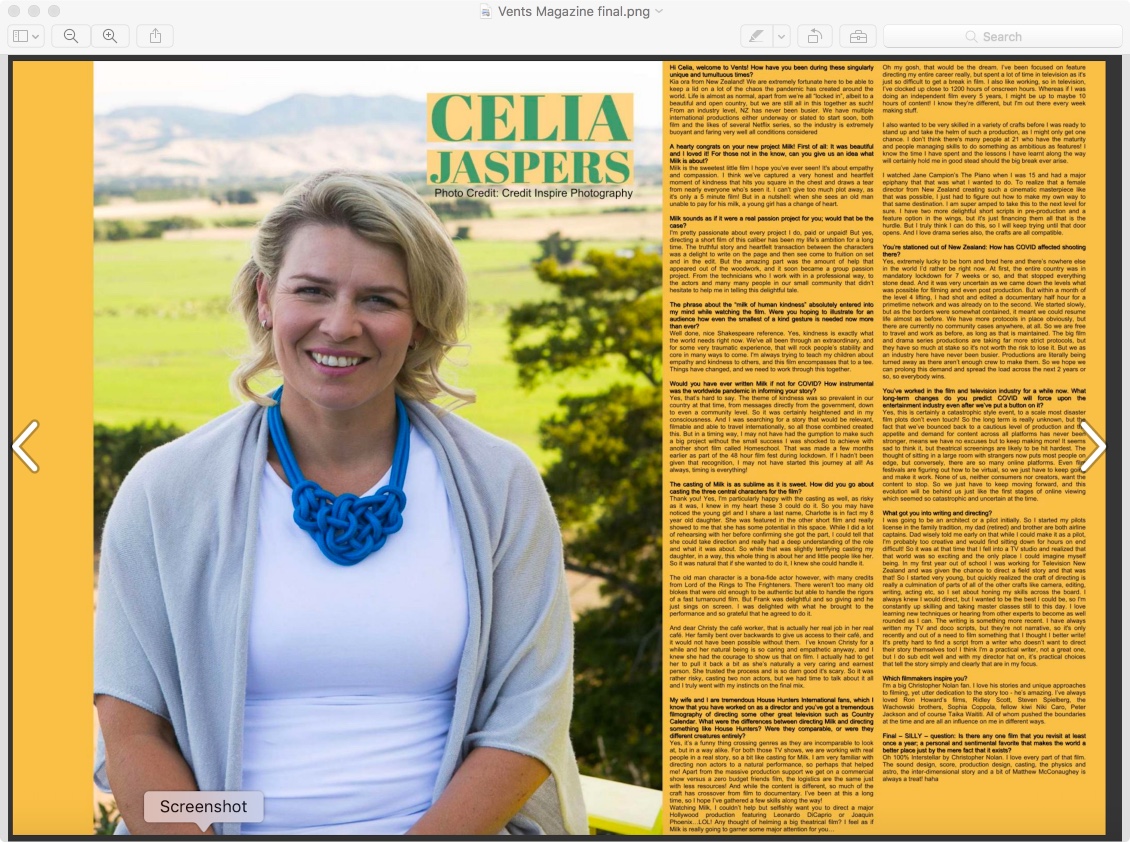 “Celia is a highly motivated producer/director who has consistently delivered GSTV excellent primetime material. She has high organisational skills and is capable of delivering television series’ by driving large production teams. Creatively she understands the necessary story arcs that modern networks demand – and has a strong visual sense. In either the producer or director league, Celia is a valuable asset to GSTV.”
Philip Smith – Managing Director GREAT SOUTHERN TELEVISION

“The show (Cool Kids Cooking) was a new concept and we wanted a director who could come up some creative ideas that would set the show apart from other children’s programmes. Celia delivered – from the outset she was totally dedicated to the success of the show – she scripted and directed (and edited a number of shows) and went way beyond what I would normally ask from a director. She is creative, very well organised, very knowledgeable about her craft and always receptive to suggestions from other team members. This won’t be the last time Celia works for Top Shelf.”
Laurie Clarke – Executive Producer TOP SHELF PRODUCTIONS

​“When I hired Celia Offwood I was gaining a total package of top quality skills; an efficient, innovative producer, a creative, committed director, and a highly skilled editor with a natural flair for the latest digital technology. Celia always has a strategy ready for every contingency and the good humoured ability to deliver quality primetime television programs on time and on budget”.
Judith Curran – Executive Producer, NHNZ Ltd.

​“Celia is extremely capable in a wide range of industry skills. I found Celia to be totally committed, well organised, innovative and always willing to use initiative. She worked long hours when required to meet deadlines, motivated those in her team well and was utterly reliable in delivering material entrusted to her.”
Tony Palmer – Producer, TVNZ

“Upon commencement Celia proved her worth quickly adapting to work systems and procedures, tight deadlines and the introduction of new digital technologies. When Celia worked under my direction I found her determined, focused and dedicated to her craft, to which she has enviable flair.” “In the short time you’ve been here you’ve earned the respect of editors, reporters and producers with keen attention to detail and a business like approach to tasks at hand. Few people in this industry have impressed me as much so early in their tenure.”
Ian Audsley – Broadcast Services Manager. CHANNEL 7, Australia

“Shout out to bad ass director Celia Jaspers killing it on an episode of House Hunters International in Wellington, NZ! Not only was she directing our drone pilot here (reference photo) but she was also running traffic with 2 cams with her DP plus six talent including two infants. Just want to say cheers and well done to a true professional. Grace, style and competence! What a joy to witness as Celia’s boss who felt more like a student today !!! #respect #ladyboss
Liz Layton – Co-Executive Producer, House Hunters International, Leopard Films USA